Weekend in the Loops

By way of Kootenay and Okanagan winter wonderlands, TSB made it to Kamloops on Friday afternoon. Separate vehicles we did take to allow a couple of our spouses/roadies/groupies to tag along for what is typically a guys’ weekend! We arrived at the hotel within 5 minutes of each other, grabbed a bite at our favourite 3-in-the-morning habitual frequents, Denny’s, and headed to the Blue Grotto for setup and soundcheck. 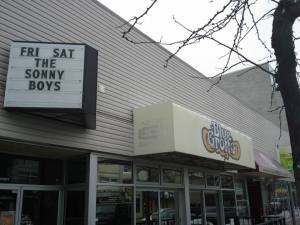 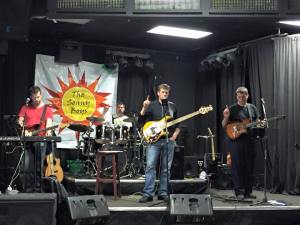 Chris was our sound tech for the weekend; a super guy to work with, and a fellow musician following in his dad’s footsteps. In typical Sonny Boys fashion, we ran through the ins and outs of a couple new songs: Uptown Funk and Love Runs Out.

First set at 9:30 was a bit slow; we are told this is pretty typical of the partay-experienced Kamloopers preparing for a wild night out. First set break in the green room came with a loaded fridge and a huge appetizer platter. We were set! We got to adding our SB logo to the others on the band walls, and by the time we returned to the stage for second set, the place was absolutely packed. From that point on, the combination of Jonny B’s sub-woofer perching, Russ missing his water bottle, Chris’ good night sleeps, and Kevin’s $30 in drugstore purchases were able to keep the “Loopy” Partiers shakin’ all night Friday and Saturday! 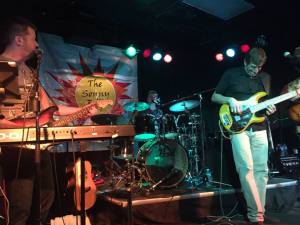 The new tunes were met by an unobstructed show of huge hoots from the crowd, staff with keen eyes kept the stage clear of Sonny Boy trespassers, and it was super to see several friends show up for our Kamloops debut! Saturday afternoon, a music producer gentleman from Germany recognized us downtown and complimented us on our versatility. He said he has never seen another band transition so seamlessly between MJ, Bruno Mars, and Taylor Swift.

Mucho thanks to Teri, Chris, and the rest of the staff at the Grotto. We’ve been asked back…stay tuned for some spring dates by following us on Facebook!

Chris, Kevin, Rodi, and Russ.
View all posts by thesonnyboys »

Posted on January 20, 2015, in main page. Bookmark the permalink. Leave a comment.